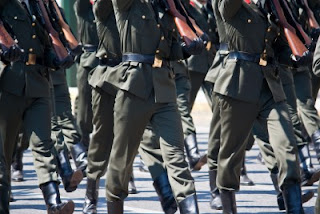 The steps of a good man are ordered by the Lord,
And He delights in his way.
Though he falls, he shall not be utterly cast down;
for the Lord upholds him with His hand.
Psalm 37:23-24 (KJV)

Until I read this verse, a lot of the events in my life didn’t make sense. I couldn’t figure out why I did certain things and what came upon me that pushed me to go in a particular direction. I often wondered why I made some choices—good and bad—and what was going through my mind when I concluded on a course in life. But when I read this, it became as clear as the day. God ordered my steps, period!

Military setup has always been a fascination of mine, and growing up around uniformed men fueled my interest all the more. One of the things I love about the way the army runs is order. When an order is given, it’s obeyed, no questions asked. I often wondered why someone would just do as they were told without questioning—simply believe that the person giving the orders knew what they were doing. Even when it seems like it doesn’t make sense, the uniformed man is trained to obey the last order given and to continue in that course until told otherwise. I realize that the only reason that system works is because words like “respect,” “order” and “honor” are taken very seriously. Can you imagine an army where the soldiers get to negotiate with their superiors? That wouldn’t be an army. These men, over the years, have come to trust the system and to believe that if you were placed in a position of authority, then you know what you are doing.

So maybe my respect for the military system has taught me one thing: obey the last order given by the one I trust the most—God. All through the pages of the scriptures are laws, orders, and commands given to man to obey. Each one unique in its own way, but connected. Each one given with the sole purpose of helping humanity become all it can be, and in a positive way. But unlike trained soldiers, many of us haven’t learnt to listen or to obey orders of any kind, which is why we still want to keep driving when the red light comes on; it’s human nature. But I have learnt that for every time I obeyed God’s command, I ended up benefiting from that act. Even when I made mistakes, it always turned out fine in the end.

I think back on one particular event and how my disobedience forced me to learn to listen and obey. It was a few months before our wedding, and my husband and I were looking for an apartment to move into after the wedding. We had looked at a lot of houses and were beginning to get really frustrated with the process. Then one day, my husband told me he had found an apartment in a location that I absolutely loved. We went to see the apartment together, and I fell in love with it immediately. But there was this check in my spirit about the deal; I could almost feel someone pulling me away from the apartment. I ignored the weird feeling and decided to proceed.

I remember my husband saying that he wanted me to meet the owner of the apartment before we made the decision. When we got into the owner’s office, I immediately started feeling the bells of caution go off in my head. Again I ignored my instincts and just told my husband I was fine with the house. Well, we went ahead, paid for the house, and it turned out to be a big scam. The guy that posed as the owner of the house wasn’t the owner, and we lost our money. I felt so bad about the experience, because I knew that God did warn me, but I had refused to listen and obey. Now I know better. Whatever he says, I do, no questions asked.

There’s too much madness and mayhem in this world for you to try to navigate it alone. Don’t take the chance. Obey His last order.
at July 23, 2012