Behind every NO, there is a YES! 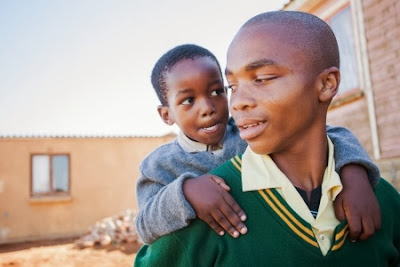 When I first recognized myself, I was this little scrawny village kid who loved to play in the sandy streets of my village along with other kids of which there were loads.   We drove our toy cars made from exploded cans of tin and used corks from the nearby drinks store as tyres. On these dusty pathways, we enjoyed every bit of the occasional sandstorms as we learnt to shut our eyes or have them filled for days with itching sand which prevented us from catching more fun in the sand, this was the way it was until the rains came.
The rain first comes with a smell of water in the air; floating in from dozens of miles away before the drops began to fall.  Boy, we loved the rain, mostly bare; we danced in the rain until our mothers came to forcefully remove us, our teeth clattering in the cold and all.  Our village had one of those kinds of rural roads that ran through the grass; there was a forest on the right and left, and grass in the middle of the road.  The tyre tracks of the few cars that came through our village seasonally and the bikes that rode through serrated the roads in two, and became collection streams for the rains.  We loved to swim in these puddles of water, hardly had any clothes and we did not bother, we also had no shoes and neither did we worry about that.  I remember my first piece of clothing was a pant. This underwear was all I wore at day to hit the streets and I wore it at night to sleep too.  I remember being naked whenever my mother removed it for washing.
It was at this time and to my biggest surprise that my elder brother Emmanuel was enrolled in school by my Dad.  It was this great local “township” school where all the grown up kids actually sat behind real desks, while the junior ones learnt under the trees in open air.  My biggest fascination with my brother beginning school was actually not the learning, it was his uniform.  He was now allowed to wear navy-blue shorts and a white shirt. I honestly had never seen anything so immaculately white in my life, so I thoroughly envied and was jealous to death of him.  Now, I wanted to go to school so bad, I hatched out a plot for my parents.
A few months after my brother had started at school, I summoned courage to ask my Daddy, a local Pastor, if he would enroll me in the school. He replied I was too young, but I was determined, I pestered, refused dinner a few times and pestered some more.  A few weeks later, I was in the Headmasters’ office in the company of my father, I was exhilarated to high heavens.   I have no clear or precise recollection of time, I was a little over 5 years at this time, but these memories are etched in my memory for ever.
The Headmaster is used to village kids infatuation with school especially those who were not up to school going age, he asked me to put my hands across my head, if my right hand got over my ear all over to my left ear, I was in, if otherwise I was not up to 6 years old and since parents were not educated enough to verify the ages of their kids anyways, the School don’t believe Parents who could like my father.  I was devastated when to my chagrin my right hand did not get to my left ear passing over my head.   I proceeded to create the most desperate dramatic scene I had ever mustered as a child and to my utmost surprise,  both the Headmaster and my Dad thought my desperation be rewarded with admission to the prestigious LSB (Local Schools Board) Township Primary School in Adum, East-Ito in Middle-Belt Nigeria.
That is not the end of the story, I literally entered heaven the day my two legs entered through the glorious navy-blue Khaki shorts and my two hands a white shirt, my own immaculate white shirt.  I had no worries over shoes as only a few spoilt kids had them anyways, I had no lunch pack but my awesome uniform was enough reward for all the work, it did not matter what the teacher said, I was in school and I had a uniform even newer than that of Emmanuel, my elder brother.  Woo Hoo!
Thinking through this experience I wanted to share a few learning points:
#1. Anyone from anywhere can be anything. Journeying from that rural community and place of lack, incapacity and illiteracy, to a world of concept and paradigms that I am in today is nothing short of a miracle, and has been a long and worthwhile journey no one would have dreamed of for me. I never forget those humble beginnings.
#2. I did not know I was disadvantaged. I thought it was normal to have what I did not have- no clothes and shoes, as I was in good company of many who didn't.  I did not know there were boundaries and this has helped me through life, because I pushed that first time and got results, I became used to pushing through every time I faced opposition or met impossible circumstances.
#3. Whatever your aspiration, reach for your dreams. Mine was the uniform, soon after I had that, I remember seeing another boy who received all the teacher adulation for answering questions correctly and once again, I wanted to be that boy.  So I studied harder as a result.  God will send your desire ahead of you as leading light for what you are supposed to be, so do not trivialize your vision.
Learn from the experience of the little boy that refused to take no for an answer, reach for the stars!

House Matters - To buy or not to buy?
Management decisions - Creativity or experience?
A Symbol and A Source
Baby Sex Predictor
Working Mom vs Stay at home Mom